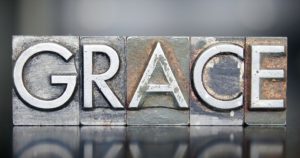 “To show grace is to extend favor or kindness to one who doesn’t deserve it and can never earn it …”  – Charles R. Swindoll, The Grace Awakening (c)1990 W Publishing Group

As a child of rural south Mississippi farmers who loved folk music, I grew up surrounded by gospel and bluegrass tunes of the 1950s and 60s, enjoyed childhood hunting and fishing on Grandaddy’s farm land, and of course, the good ole southern country cooking that comes with farm living.

I’m not sure exactly when I understood what grace really was, or what it meant, until one day when my brother and I took a little fishing trip with Dad, down the trail to Grandaddy’s pond.

It was probably summer, and we grabbed a couple of cane poles, a rod-n–reel, catalpa worms and crickets for bait, and Grandaddy’s .22-caliber single shot rifle, bolt-action, sorta like the cowboy heroes of 1950s TV land used.

Long story short, we were walking down the dirt trail from Grandaddy’s house to the pond just down the hill from the cow pasture.  We brought along the rifle to shoot at birds, squirrels, and tin cans for target practice.  At least, that’s what Dad and Grandaddy always said … target practice.  As we were walking along, humming and whistling familiar tunes with Dad, enjoying the sunny day that God had provided, I noticed a lone little blackbird perched on a tree limb along the trail.  It was a perfect target, in plain view, and not more than 20 yards ahead of us.

I hushed my brother and quickly asked Dad for the rifle.  He slowly and carefully loaded it and handed it off to me.  I slowly and carefully gripped the rifle in my best aim-to-shoot posture, just like Grandaddy had taught us.  Focused my little blackbird target in the sights on top of the gun barrel, took in a deep breath, slowly exhaled, gripped the trigger … and POW … my target flailed and flapped and fell to the ground.

I was only eleven or twelve years old at the time, but … I did it!  I shot my first “wild animal”, all by myself.  Dad and Danny celebrated with me for a moment, then we ran to bag our prey.  As we approached the little blackbird, I could see that it was still struggling to breathe, its wings flittering and flapping, its little body flopping randomly.

I vividly recall, even now, the rush of emotions I felt in that moment. The adrenaline rush of excitement over my first kill, and the country boy anticipation of ‘bagging’ my prey … was quickly reduced to a flooded moment of horror, panic, fear, and sadness.  I felt nauseous.  My heart raced and I felt short of breath.  I felt a sharp pain coming over my entire little body.  Just as that little blackbird must have been feeling as it lay dying under that lone oak tree on the trail to Grandaddy’s pond.

I looked on as that little blackbird took its final fleeting breaths.  I watched its eye darting to and fro as it desperately sought it’s final breath, under the bright blue sky and the warm sunshine near that lone oak tree on the trail to Grandaddy’s pond.

After a few somber moments, Dad gathered up the lifeless little blackbird, tucked it into my hunter’s backpack — the squirrel bag, as Grandaddy and Dad called it — and we proceeded to walk on down the trail to Grandaddy’s pond.

I took off the backpack at the pond, we baited our lines, and then we fished and caught bream and catfish for what seemed like a few hours.  Dad helped us string up the fish and tote them back to Grandaddy’s house, back up the trail, where we would pass by the lone oak on the trail to Grandaddy’s pond.  My heart sank, once again, as Dad carried the string of fish, and as I carried the backpack, with the now cooled and lifeless little blackbird tucked in, as we passed by the lone oak tree on the trail to Grandaddy’s pond.

We cleaned up all the fish, threw off our sweaty clothes, grabbed Mamaw’s garden hose and sprayed ourselves down after a fun-filled day of fishing … and my single gun shot at the little blackbird target.  Then we enjoyed a country boy’s dream of home-cooked fried fish with all the fixins at Mamaw and Grandaddy’s table.

Later, mom and Dad would tuck us in for bed, probably to the tune of a favorite gospel or bluegrass song, and probably a Bible verse or two.  And, I would try to sleep, but my little mind was ravaged by the scenes of my first kill.  Of that little blackbird.  Of the awful pain it felt.  Of the pain that I felt in my soul.

I continued to fish and hunt through my teenage years, and on into my adult life.  Admittedly, I have not fired a rifle for more than 30 years, not even at a firing range.  Probably, because I ‘see’ that little blackbird in the sights of the rifle, at least in my mind’s eye.

That day is forever etched in my memory.

I’ve never forgotten the pain I felt that day, amidst all the fun and laughter of fishing with Danny and Dad at Grandaddy’s pond.  I’ll never forget the Holy Spirit nudging me all day, to consider what Grace feels like.  To consider what life and death feels like.  To begin to understand what regret and shame feel like.  To try and sort out right and wrong.  To realize the power within my own little hands, to take life, for sport, because I could.  And, to feel the pain within my soul, once the deed was done.

I have prayed that prayer again and again, many times over, and for countless other reasons.  I have asked God’s pardon, His Grace, a thousand times.  I have sought to understand His kindness and mercy, His undeserved favor, everyday.

And almost everyday, when I pray those prayers for Grace … I remember that little blackbird under that lone oak tree on the trail to Grandaddy’s pond.